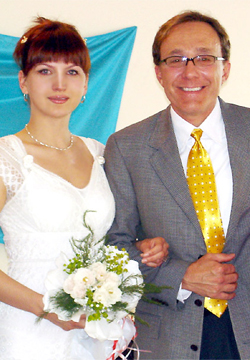 Dear Oksana: Nine trips, several other agencies with countless introductions never got me the results I was seeking. I only wish I had found your agency sooner. Olga and I each think we have found a “one in a million” partner.
Read the whole story ->

The meaning of letters

Personal correspondence is an individual’s thoughts and emotional relief. Often, it may be a soul confession. It is in letters that the spontaneity and frankness of the sender can be seen. Some short note or message can recreate the person’s character features, circle or interests, attitude to the events, as well as his/her intensions and attitude to an addressee. It’s interesting to read peoples’ letters, so as you can revive the writer’s feelings, see events and understand the world through his eyes. Often, through the letters you can get a vivid imagination of an interlocutor, and the monologue turns to be like some kind of dialogue, where the sender and receiver have some interesting way of interaction that resembles a vis-à-vis conversation. A letter is a really good tool to get to know the person better, since it’s usually easier to write about some things, than talk about them face-to-face.


In different historical periods the writing style of letters and messages was different. There were specials guides for letter writing, where people could find the examples of letters of personal and business correspondence. Eventually, letter became a tool of business, professional, private and friendly communication. During the XX century the genres of letters underwent serious changes. The stream of private correspondence became very low in comparison with the previous decades. Though, by the end of second millennium and beginning of third one, new informational technologies and appearance of electronic mail have given a strong impulse to the renaissance of private correspondence.


With the appearance of the e-mail phenomenon, letters found new applications in business and personal communication. Such greetings like Good day, Hi, Hello can “co-exist” with addressing like Respectable, Dear. The correspondence became more dialogue-like with the appearance of the fabulous net-invention of smilies :) and other funky faces and symbols. At the same time style of writing became more liberated. High speed of letter exchange influenced the frequency of the communication, making people feel closely connected on the emotional level.


While correspondence can use mixed styles of writing, nevertheless a common template exists, similar for many countries; only writing styles can be more or less expressive. For example, Russian women, by their nature are very sensual and passionate. Hence, they are more explicit and emotional in their letters than, for example women in some other western or eastern countries. It could be said that a more emotional person is easier to read, and he/she appears more sincere in self-expressions.


Salutation can show the level of intimacy, attraction, or dislike to the addressee. In general, people in CIS are quite straight. They only say what they think and feel. It’s good to know such mentality differences if you are in correspondence with a girl from a post-Soviet country. If you get a letter saying Hello my dear, it most likely means that the lady appreciates your relationship and thinks of you as of someone special to her. If, in the end of the letters she sends you her Warmest regards, it means that she is sending her warmth and wishes to be closer to you. I’m impatiently waiting for your answer - says that she often thinks about you and that your letters became a part of her life. Sending a kiss shows that along with emotional attraction your Russian bride has already thought about moving to the next stage in your relationship. And, of course, love in the end of the letter means exactly that …. :-)


However, despite any possible explanations, letter writing does leave room for misunderstanding and should never be the only factor to determine the future of your relationship. If you receive a reply you were not hoping to hear, don’t jump into frenzy. Think about possible ways your initial question could have been misinterpreted, and consider asking a reassurance question, such as Did I understand correctly that you mean…, restating what you feel the lady mentioned to you. Often our surroundings and earlier events of the day can cause us to see things in a distorted manner, and it is best to be safe than sorry.


Aside from the letters written, it is also advisable to keep notice of other behaviors and attitudes of the Russian woman you are corresponding with. If she writes you about how much she loves you, but when you schedule a phone call she is never available, chances are, she is not as sincere as her letters say. On the other hand, even if she doesn’t write long letters, but remembers your favorite food and makes a point of telling her friends about you – you have probably found an honest woman, genuinely interested in who you are.


Letter writing can be indeed a great way to learn about a person, to share things that might not necessarily come up during a casual conversation at dinner. But pen and paper will never be able to substitute the real person, whom you wish to know. A personal meeting can not be replaced by any number of well-written long letters or facts shared. Seeing your pen pal in person will tell you even more about that person: the mannerisms, the tone of voice, the way one carries himself/herself – all these things will be putting final strokes to the impression of that special someone you’ve been sending letters for months.


So, whether by hand or e-mail, brief of lengthy, may your letters be inspired and lead you to finding happiness and that unique person, who will complete you!