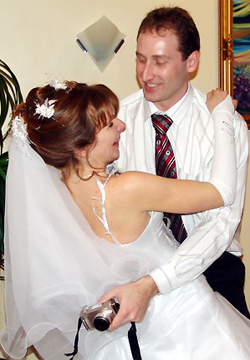 Thank you for all that you have done to get me and Irina together. I have never met a more helpful and caring organization. I would urge anyone with thoughts of meeting the woman of your dreams to use the services of Oksanalove!
Read the whole story ->

Russian-speaking women of Kazakhstan and their ethnicity.
Kazakhstan is one of the Central Asian countries located between two great neighboring powers: Russia and China. It’s a multi-national and multi-cultural state. Almaty is one of the main and biggest cities in the country. About 130 nationalities live here in peace and harmony. Tourists visiting this destination are amazed by its main heritage and possession – beautiful women of different ethnic backgrounds that honor and preserve their culture and traditions.

First of all it’s worth mentioning that Kazakhstan during the centuries has been greatly influenced by diversity of Eastern and Western lifestyles, and two biggest in the country Muslim and Orthodox confessions. The state language here is considered to be Kazakh – one of the Turkic group tongues, even though Russian is the language that is widely spoken and used by the population.
Kazakh and Russian ethnic groups are the majority. All other national minorities also have their firm positions in the state. According to the “Wall Street Journal” this country is an example of ethnic and religious tolerance throughout the whole Asian region.

Russian and Asiatic cultures have created a unique synthesis of being here. The ladies greatly influenced by diverse of ethnic colors are extremely attractive, unusual, smart and proactive.


There is a common understanding of women in this area: European and Eastern types. Orient girls are well known for their mysterious look and men honoring; European background ladies - for their brightness and good treating of their husbands. All the females here are very well-mannered, charming and elegant; they all share their values and love secrets with each other. However, the most important is that they all are family focused from their childhood. For all of those girls, coming from ethnically different families one is unchangeable – traditionally their mothers raise them up keep telling that family is the most precious value in the world. That’s why all Russian-speaking women make their best efforts and investments for the family creation.

Western people coming to Kazakhstan and meeting the Russian-speaking women for the first time can’t hide their amusement and wonder of how much sincere, kind, understanding and caring they are. The ladies here like to do things regarding housing with their own hands, no matter if they work or not. They pretty much like to raise their kids and cook for their husbands. When talking about love, any of these sweet girls can tell you how much they are inspired to meet a man of their dream and fall in a greatest ever love with him!

Some real stories happened to the guys kept them endlessly happy about meeting their on-line brides here, in girls’ home-town. The men had a chance to witness their ladies’ being in so usual and natural for them environment.

Any wise man, after having several months of correspondence with the one he finally found for love and family creation wants to see his future wife in everyday life. At the same time, he accounts to get some understanding of fiancee’s national roots, life-style of the country she grew up in, etc. Of course, such an approach to serious relationships is important. It’s a best way of acquaintance for a mixed couple, coming from different cultures and mentalities. The gentlemen who visit their brides before the marriage, after attending her home know what difficulties their Russian-speaking wife can face in his home-land. Of course, it’s easy to guess that their relationships can benefit a lot from such an experience.

First of all it makes the couple closer spiritually, and secondly, it prevents men from any sort of misunderstanding and mistreating of their spouses. For this reason “oksanalove” often hosts grooms in the agency’s Almaty branch. During such TOURS
guys don’t stop getting excited and after, they just forget they had some doubts about the rightness of their choice.

The most memorable examples of fiance hosting is still something amazing to talk about in the “oksanalove” agency. It’s the stories about how guys were impressed by the hospitality of their future wives and how their brides even exceeded all of their expectations. They were completely puzzled by the fact that their fiancees can be so gorgeously beautiful and at the same time be just good housewives who cook, do the laundry, clean and take care of their men – simultaneously doing all these things.

Usually, when guys come to Kazakhstan to see their Russian-speaking future wives the girls go to meet them at the airport. This is what happened to one of Oksanalove's couple. When an American man came to Almaty for a face-to-face date with his bride. First of all, it’s worth mentioning that this girl lives in Karaganda – a northern Kazakhstan city, she also came to Almaty to meet her on-line groom. While waiting for a driver to pick her up from the apartment that was especially rented for the couple’s first date, she went shopping to get products for cooking. The bride was so keen by this; she so much wanted to make a surprise for her man that she forgot she may be late with her shower and other girl things. But Kazakhstani women are always lucky with this they can be inventive and get on well with everything. She made time to finish all the stuff and look fantastic, except of the fact that she didn’t manage to dry her beautiful long hair. She thought never mind and went out in a cold winter night to ride a car and meet her groom in the airport. Nobody has seen her so beautiful before that night when she dried her hair towards the heater in the driver’s car. When she told about her adventurous date preparation to her man he was just amazed and completely charmed! This wonderful and loving couple is very happy in their marriage.

Another nice and pretty lady every single day has cooked delicious meals at her home and was bringing them to her future husband in his hotel room when he was on his TOUR
to Almaty. Such attitude never leaves people indifferent. That’s for sure! The fact is that, in comparison with girls from such cosmopolitans as Moscow, Kiev or Odessa that usually loaded with foreigners, Almaty is not so popular among them due to its remote geographical position. Local girls are not really spoiled by attention of travelers and their exquisite treating. All of the Almaty girls who grew up under hot Almaty sun in a friendly and specific multi-cultural environment are warm, passionate and unique. They all look for someone to give all their love and care sharing with their values.