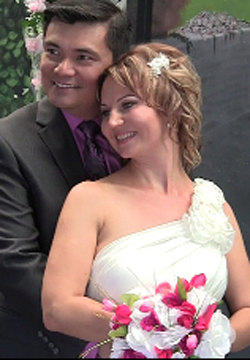 And after spending only just one day with Vika, I knew she was the one for me; and before I returned home to the USA, we were engaged.
Read the whole story ->


NOTE: This law is not applicable to US clients and foreign nationals that met either electronically, by post, or telephone prior to March 6, 2006

Based on our client’s many questions and to avoid misunderstandings, Oksanalove has decided to explain in simpler terms what the “International Marriage Broker Act” is about, and how it impacts American citizens seeking marriage to a foreign nationals of any country. In particular we have addressed portions of the Act that directly affect Oksanalove, Inc.’s release of client contact information and Fiance Visa related issues.

REASON FOR THE LAWS PROPOSAL:

To address, identify, and reduce cases of domestic violence committed by US citizens against foreign citizens that have immigrated, or are in the process of immigrating to the USA.

EXCERPTS FROM THE BILL ITSELF:

This Act may be cited as the ‘‘Violence Against Women and Department of Justice Reauthorization Act of 2005’’.

1. Performed a search of the National Sex Offender Public Registry, or of the relevant State sex offender public registry for any State not yet participating in the National Sex Offender Public Registry in which the United States client has resided during the previous 20 years, for information regarding the United States client

5. FEDERAL CIVIL PENALTY—An international marriage broker that violates (or attempts to violate) is subject to a civil penalty of not less than $5,000 and not more than $25,000 for each such violation.

6. FEDERAL CRIMINAL PENALTY.—In circumstances in or affecting interstate or foreign commerce, an international marriage broker that, within the special maritime and territorial jurisdiction of the United States, violates (or attempts to violate) shall be fined in accordance with title 18, United States Code, or imprisoned for not more than 5 years, or both.

CHANGES IN PROFILE AND REGISTRATION PROCEDURES TO ACHIEVE AND MAINTAIN COMPLIANCE WITH THIS LAW BY
Dating agency www.OKSANALOVE.COM

Based on this new law, Oksanalove, Inc. as an IMB (International Marriage Broker) will need to obtain additional information from US clients regarding the topics listed below:


2. Previous K visa applications submitted by our US clients


4. Under this new law, OKSANALOVE Dating agency is required as of March 6th of 2006 will start checking every US client for marital history and domestic violence or other violent criminal history. Oksanalove Dating agency will notify clients that are foreign nationals (female clients) with background information on US clients resulting from the mandatory queries of Federal and State public registries for sex offenders and collected from United States clients.

CHANGES IN SERVICE PROVIDING TO OUR FEMALE CLIENTS AT OKSANALOVE.COM

4. COLLECTION OF BACKGROUND INFORMATION: Each international marriage broker shall also collect the background information about the United States client to whom the personal contact information of a foreign national client would be provided.

1. The Consulate or Embassy of US will verify that the petitioner has not, previous to the pending petition:

2. have two or more applications submitted before for aliens

3. If the petitioner has had a petition submitted previously and it was approved, 2 years must have elapsed since the filing of such previously approved petition. The Secretary of Homeland Security may, in the Secretary’s discretion, waive the limitations if justification exists for such a waiver. Except in extraordinary circumstances, such a waiver shall not be granted if the petitioner has a record of violent criminal offenses against a person or persons.

4. The Consulate has to provide a foreign woman with the US Government issued information pamphlet (see section below for information pamphlet). The pamphlet will be mailed by the Secretary of State to each applicant for a K nonimmigrant visa at the same time that the instruction packet regarding the visa application process is mailed to said applicant. The pamphlet so mailed shall be in the primary language of the applicant or in English if no translation into the applicant’s primary language is available.


REASONS FOR WAIVING THE LIMITATIONS AND OR EXCEPTIONS:

1. the petitioner was acting in self-defense;

3. the petitioner committed, was arrested for, was convicted of, or pled guilty to committing a crime that did NOT result in serious bodily injury or subjected another individual to extreme cruelty.

In acting on applications under this subparagraph, the Secretary of Homeland Security shall consider any credible evidence relevant to the application. The determination of what evidence is credible and the weight to be given that evidence shall be within the sole discretion of the Secretary.

1. During an interview with an applicant for a K nonimmigrant visa, consular officers shall provide information, in the primary language of the visa applicant, on protection orders or criminal convictions collected on applicant.

2. provide a copy of the pamphlet developed in English or another appropriate language and provide an oral summary, in the primary language of the visa applicant, of that pamphlet

There will be a pamphlet developed for foreign women that has to be provided by International marriage brokers to them.

The Secretary of Homeland Security, in consultation with the Attorney General and the Secretary of
State, will develop an information pamphlet on legal rights and resources for immigrant victims of domestic violence and distribute and make such pamphlet available.


1. The K nonimmigrant visa application process and the marriage-based immigration process, including conditional residence and adjustment of status.


3. Domestic violence and sexual assault services in the United States, including the National Domestic Violence Hotline and the National Sexual Assault Hotline.


4. The legal rights of immigrant victims of abuse and other crimes in immigration, criminal justice, family law, and other matters, including access to protection orders.


5. The obligations of parents to provide child support for children.


6. Marriage fraud under United States immigration laws and the penalties for committing such fraud.


7. A warning concerning the potential use of K nonimmigrant visas by United States citizens who have a history of committing domestic violence, sexual assault, child abuse, or other crimes and an explanation that such acts may not have resulted in a criminal record for such a citizen.


8. In order to best serve the language groups having the greatest concentration of K nonimmigrant visa applicants, the information pamphlet will be translated by the Secretary of State into foreign languages, including Russian, Spanish, Tagalog, Vietnamese, Chinese, Ukrainian, Thai, Korean, Polish, Japanese, French, Arabic, Portuguese, Hindi, and such other languages as the Secretary of State, in the Secretary’s discretion, may specify.

1. In fulfilling the requirements, an international marriage broker shall disclose the relationship of the United States client to individuals who were issued a protection order or restraining order or of any other victims of crimes as described, but shall not disclose the name or location information of such individuals.

2. PENALTY FOR MISUSE OF INFORMATION.—A person who knowingly discloses, uses, or causes to be used any information obtained by an international marriage broker as a result of the obligations for any purpose shall be fined not more than 1 year, or both. These penalties are in addition to any other civil or criminal liability under Federal or State law which a person may be subject to for the misuse of that information, including threatening, intimidating, or harassing any individual.

1. International marriage broker - a corporation, partnership, business, individual, or other legal entity, whether or not organized under any law of the United States, that charges fees for providing dating, matrimonial, matchmaking services, or social referrals between United States citizens or nationals or aliens lawfully admitted to the United States as permanent residents and foreign national clients by providing personal contact information or otherwise facilitating communication between individuals.


2. K NONIMMIGRANT VISA.— a nonimmigrant visa of the Immigration and Nationality Act


3. PERSONAL CONTACT INFORMATION.— information, or a forum to obtain such information, that would permit individuals to contact each other, including— the name or residential, postal, electronic mail, or instant message address of an individual; the telephone, pager, cell phone, or fax number, or voice message mailbox of an individual; or the provision of an opportunity for an in-person meeting. EXCEPTION.—such term does not include a photograph or general information about the background or interests of a person.


4. REPRESENTATIVE.— with respect to an international marriage broker, the person or entity acting on behalf of such broker. Such a representative may be a recruiter, agent, independent contractor, or other international marriage broker or other person conveying information about or to a United States client or foreign national client, whether or not the person or entity receives remuneration.


6. UNITED STATES.— when used in a geographic sense, includes all the States.


7. UNITED STATES CLIENT.—means a United States citizen or other individual who resides in the United States and who utilizes the services of an international marriage broker, if a payment is made or a debt is incurred to utilize such services.