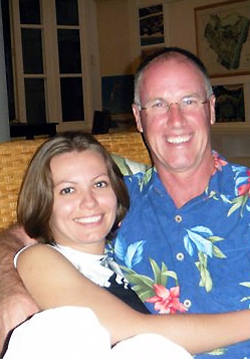 Oksana Introduced me to the most wonderful, amazing, sweet, beautiful, perfect match for me....she introduced me to my "Dream Girl"!!!! I am engaged now to the woman I have waited a lifetime to meet.
Read the whole story ->

The origins of the tradition to exchange rings have not been determined for certain, but it is known that such tradition existed as far back as Ancient Egypt. At that time, rings were also used a stamp, and pharaohs used them as a sign of power and a way to transfer it to the representatives. Over time, golden rings were worn by women of royalty and nobles, those who were not so rich used rings of less costly materials (silver, bronze, glass, and copper). In ancient Rome rings were a way to identify a social status: only those of highest social positions had the right to wear golden rings, citizens could wear silver rings, and slaves were only allowed rings made of metal.

Romans were also the first ones to introduce the tradition of engagement: the groom would present bride’s parents with a metal ring, as a sign of his commitment and ability to sustain family. Most marriages at that time were made by agreement, and engagements ceremony was a more important step than the wedding itself, the latter served simply a conclusion to a successful engagement. The ring became a part of the wedding ceremony only at a much later date, introduced by Christianity. At first, man and woman would exchange brass rings at engagement, then engagement rings used were made of gold, and only in the 4 century a.d. were they first used in a wedding ceremony. It is curious to note the difference in Orthodox and Catholic tradition: in Orthodox ceremonies the ring is placed on the ring finger of the right hand, while Catholics place it on the left. These fingers are considered to have the veins, which are directly connected with the heart, thus being symbolic of love joining two people.

In Russia, ancient traditions of engagement reflect a lot of the world history. Engagement was performed prior to a wedding and usually with a large number of witnesses, as it was a way to confirm a wedding agreement. This agreement was an official document, which regulated material and legal rights of the Russian wife and husband-to-be. Ring (made of gold, brass, metal – according to the wealth level) was used not for decoration, but mainly to “stamp” the ownership, as from that moment on the woman would have to take care of the house and the husband’s property (as already mentioned, rings were used as a stamp to mark ownership and confirm business/legal papers). Traditionally, engagement and wedding rings were treated as separate rings and had separate meaning, there was a time and a place for each.

While traditions of engagement exist all over the world, many countries have unique ways to mark this step. Below are some unusual ways to get engaged.

Africa: A well-known custom in African weddings is “jumping the broom” which is symbolic of jumping from your single, carefree life into a life together with your spouse. The term to “tie the knot” is also likely to come from Africa, where couples are joined symbolically by having their wrists tied together with a ribbon.

Armenia: The groom and his family visit the bride-to be at her home. The young woman stays in her room and can not come out until her parents accept the proposal.

Austria: In the past, groom’s friends or family went to offer a proposal of marriage to the family of the bride-to-be. If they saw goats, pigeons, or wolves on their way, it was considered a sign of good fortune for the marriage.

Brazil: Brazilian folklore suggests that a man has to prove himself a suitable husband by taming an unbridled donkey. They called this “bumba-meu-boi”.

Chile: Similar to Argentina, in Chile couple exchanges wedding rings when they become engaged, and wear them on their right hands until they exchange their marriage vows. After saying “hago” (“I do”), they then switch the bands to the left as a sign of being husband and wife.

China: In ancient tradition, a negotiator spoke with parents of the bride and groom-to-be. Groom’s family would give this person gifts and a proposal request for the bride’s family. If the latter accepted, they would forward the girl’s date and hour of birth through the negotiator. Then, documentation was put on an altar for three days. If during that time everything was fine with both families, then an astrologer would analyze the birth information to forecast if marriage is successful. Only after this step families would get to know each other better and decide if they will proceed with marriage.

England: In the Middle Ages, the groom would kidnap his bride and had to offer its family the debt of losing such a valuable helper by paying with gold, so they could hire a helper. And, of course, a well-known tradition to propose on one knee comes from the medieval times, when knights would show respect by bowing down on one knee.

Finland: A proposal is a very private event, which is unlikely to be flaunted by the couple. The bride and groom-to-be can present the future in-laws with small gifts to mark the engagement.

France: This country is responsible for the origin of yet another well-known tradition: hope chest. A young woman would save things for honeymoon and future home long before she even began dating.

Israel: Marriage proposal verse is said out loud by the groom-to-be and written down by the witnesses.

Italy: Much negotiation was done through a matchmaker, who spoke to the bride’s family of the potential suitor. The family would then discuss the proposal, and, while everyone’s opinion was included, the father was the one who made the final decision of rejection or acceptance.

Japan: Also turned to the services of “go-between” (called Nakado), who arranged the engagement and the following ceremonies upon acceptance. During the betrothal period (called “Yui-no”), the groom and bride-to-be would exchange gifts; the girl is given a sash (called “Obi”), which represents virtue, and a skirt (called “Hakama“), representing fidelity, is returned to the groom. All together, they can exchange up to nine gifts, all of which symbolize fortune and happiness.

Korea: When coming to ask for a woman’s hand, a man would ride a white pony to his future bride’s house, where he offered a pair of geese to the lady’s family, as his promise to be faithful for life. Unlike typical Western tradition of groom asking for permission from bride’s parents, the bride must be introduced to the groom’s family before she can be accepted as the bride-to-be.

Morocco: The bride has a ritual henna painting done on her hands and feet after she takes a symbolic purification bath, she then anoints the palm of her guest before the ceremony. The bride has to walk around her new home three times before becoming fully a “mistress” of the house.

Philippines: When a woman found a spear thrown at the front of her house, she was considered officially engaged.