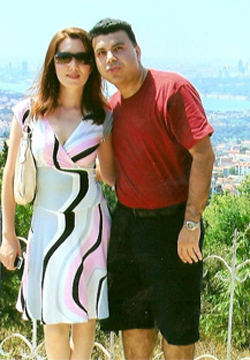 Hello Oksana, we would like to thank you for giving us the opportunity to meet and fall in love, it has been a wondrous year and we look forward to the adventure which is our lives together.
Read the whole story ->

In the diverse world of Internet dating many men find that Russian/Ukrainian women often pursue relationships with partners who are significantly older than them. It is not uncommon to see an 18 year old young woman communicating with a 40-45 year old man. On one hand, it might seem strange; however, there is a list of reasons why it all makes sense.

It is common knowledge that girls mature faster than boys. In the former USSR countries this process seems to be even more accelerated. Many kids here see how hard their parents have to work just to provide the food for the family every day, they know the challenges of life, they watch the corruption and unfair proceedings of the country. Girls, in particular, often face behavior that in some other countries could be considered harassment: many women can find a job and earn money only if they win favor of their male bosses; often ladies are perceived as merely dolls without brains. Basic instinct of self-preservation and aiming for improvement make Russian girls search for better alternatives and men, who can appreciate them.


Until recent years there was a tendency among Russian brides to marry men close to their age who were either their high school sweethearts or college/university pals. Statistics show that 50-60% of marriages fall apart within the first three years of the union. Many women end up leaving the relationship with children, as well as disappointment in men their age from their home country. As a result, they turn to foreign men who are older and expect them to be more courteous, wise and caring.


An additional factor in searching for older men is also women's psychological perception. Since many girls grow up in "incomplete" families and are abandoned by their fathers, when they search for a relationship, on a subconscious level they veer more towards older partners. In other words, they are looking for a "father figure". They sometimes don’t even realize it, but when they turn to older men, they are looking for someone to be their protector, someone who'd take care of them and give them security they were deprived of as a child.


Although such pressure is getting less in the current days, until recently a lady could be viewed as an old maid unless she got married by the age of 22-23. On the contrary, most men do not face much pressure and begin getting serious about starting a family only close to their 30s. That automatically puts a 7-8 year difference between the partners. Add to it the time that men spent with the "wrong" partner in a previous marriage/relationship, and that puts available male candidates right at their late 30s – early 40s, which creates such a drastic age difference between the ladies and them.


Bottom line is: true love has no boundaries. If you find someone who seems attractive and interests you as a person, be daring and take a chance of finding your special one despite the age and distance.